’Hope for Helpless e.V.’ (HFH) is an association in support of the same named children’s aid project in Uganda. 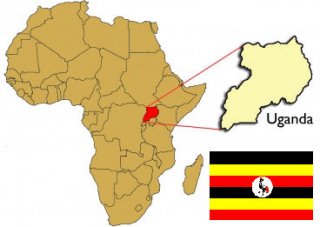 The Republic of Uganda is also known as the ’Pearl of Africa’. It is a landlocked country in East Africa, bordering Kenya, Tanzania, Rwanda, DR Congo and Sudan.

On 9th October 1962 Uganda got its independence (now National holidays).

Of the total population (about 32.7 million) roughly 2 million people. live in the capital, Kampala. There are more than 40 ethnic groups, which are divided into the two major groups of the Bantu (including Baganda, Banyankole etc.) and Nilotic (including Acholi, Langi). Approximately 45% of the population are Roman-Catholic, about 35% Anglican and about 10% Muslim. About 1% of the population are followers of traditional African religions. The average age of the Ugandan population is 15 years. The official languages of Uganda are English and Kiswahili. The latter is hardly used in the civil administration and provides only the command language of the police and military. The main local languages are Luganda, Luo, Iteso and Rwanyankole. Scenic Uganda is very versatile and fertile. It is surrounded by lakes and swamps of the White Nile (Victoria Nile and Albert Nile), jungles and savannas. In the south is the equator. The warm tropical climate is significantly cooled by the altitude of the country. Since Uganda is mostly a plateau at 1,000 m above sea level, the temperatures vary between 25 and 30 °C during the day, at night there are usually around 17 °C. Earlier there was rainfall throughout the year, there were only two drier periods (December to February and June to August). Today, however, there are due to climate change regions especially in the northern part of Uganda where it does not rain for years, while the rest of the former tropical humid country more and more depends on monsoons and has only about one rainy season.

Since 29th January 1986 Yoweri Museveni is the President of Uganda. He has been re-elected five times, although his candidacy after more than two terms only was possible after a constitutional amendment.

In the 20-year civil war in northern Uganda, the ‘Lord’s Resistance Army’ (LRA) terrorized the population from Sudan, who had also suffered from attacks by Ugandan government forces. Several negotiations between the parties failed, until after preliminary talks in August 2006 on 23th February 2008 by the mediation of South Sudanese President Riek Machar a ceasefire agreement by representatives of both parties was signed. Joseph Kony, the LRA leader, had his support for the agreement pledged but not yet personally signed by March 2010. Nevertheless, Northern Uganda has since remained spared from further raids, while the LRA continues to carry out acts of violence in the north-eastern Congo and has possibly also shifted to Darfur.

Despite the fact that the current government does as positive sympathetic to human rights group and has signed and ratified all major international treaties and conventions, there are still significant shortcomings, such as dealing with political parties and opponents of the regime or the recruitment of child soldiers. Joseph Kony, the leader of the LRA, is responsible for the kidnapping and enslavement of at least 25,000 children and young people.

Homosexuals are persecuted politically and legally in Uganda and can be punished with up to 14 years in prison. Same-sex marriages are expressly prohibited by law. Since 2009, even the introduction of the death penalty for homosexuals is discussed, 2011 is a relevant application has been introduced into Parliament. The decision, however, was postponed twice due to international protests. In the population, there is often an anti-gay sentiment, which is fueled in particular by Christian preachers who are funded by clerical associations in the United States, as well as by Muslim preachers. Special interest in Western countries raised the issue as Ugandan media in 2010 called openly for the killing of homosexual men and thereby published lists of actual or alleged gay men with names, pictures and addresses. In the murder of gay rights activist David Kato only a short time later the Ugandan police showed lack of interest and many questions remained open until today.

In April 2011, eight people were killed and more than 250 others wounded by police forces in demonstrations (’walk-to-work’ protests against high food and fuel prices). The opposition leader Kizza Besigye was arrested and subsequently had to be treated in a hospital for several days.

The media in Uganda can report critically about the government, although they sometimes reacted sharply to reports on sensitive issues such as the rebel war in the north and the involvement of the country into civil war in the Congo in the past as well as the issue of child soldiers. Since the coming to power of President Museveni media landscape has been liberalized and are now more than 100 radio stations registered.

The life expectancy of the Ugandan population is on average 51 years. With 7.1 children/woman fertility in Uganda is the highest compared to other East and South African countries. The infant mortality rate is 8.0%, the children mortality rate 13.8% (2001). The maternal mortality rate is 0.55%. There are 0.08 physicians/1.000 inhabitants. 56% of the population have access to safe drinking water, 41% to sanitation. Moreover Uganda was one of the first countries in Africa, who admitted being affected by AIDS. That’s why AIDS awareness campaigns were done early and this topic is not a taboo in comparison to other African countries, but openly discussed. Officially, the HIV infection rate amounts to 5-15%, the number of HIV-infected persons is amounted to 600,000, in 2001 there were 84 000 HIV deaths. However, all information on the population regarding the AIDS rate should be viewed critically, since the state of Uganda receives donations from abroad as a model country in the fight against AIDS and international success is under high pressure. AIDS patients are sometimes preferred in medical care.

Uganda is faced with high poverty levels, increasing child sacrifice cases, rising HIV/AIDS rates (including other diseases like malaria, tuberculosis, cholera), high costs of education and health which are bound to increase the number of disadvantaged children in Uganda.

Noting that HFH has several aims and objectives, which are pertinent in fostering and promoting the welfare of the orphans and the vulnerable in order to reduce the suffering.